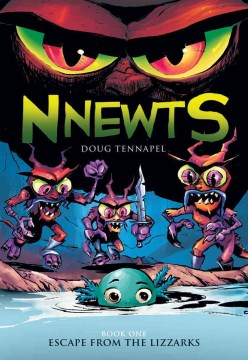 A war between amphibians and lizards, with humor, magic, and villains with mustaches. All of these elements can be found in NNewts, which introduces readers to a new series featuring a clash between amphibians, the Nnewts, and their scaly counterparts, the Lizzarks. Told in rich and vibrant colors, this graphic novel tells a beautiful, humorous, heart wrenching, and charming story that will appeal to children 9 and up who enjoy tales of adventure and fantasy.

The series opens on a young NNewt, Herk, whose legs are underdeveloped, which forces him to spend his days in the family pond fighting imaginary monsters, until the day the Lizzarks, commanded by the Snake Lord, attack. Herk’s family is killed in the assault and he is forced to flee through underground waterways to escape. These events start Herk’s epic journey as he tries to find those responsible for the death of his family. On this quest, he meets the first Nnewt, Anthigar, in his ruined, watery kingdom and learns what really happened to his legs. Herk also learns that his village was not the only Nnewt settlement and that there are darker, more sinister forces at work and somehow he is at the center of these events. Herk must look within and master new abilities if he is to save himself, the remaining NNewts, and defeat the evil Snake Lord.

Tennapel is grappling with many issues in this story, unabashedly dealing with death, purpose, and identity, but doing so in an accessible way. The artwork heavily relies on varying shades of green, red, purple, and orange to create a vivid and dynamic story that almost leaps off the page. While this tale does feature violence, it never veers too heavily into visual details and intersperses humor throughout to lighten the mood. This series quick space, vibrant colors, and engaging story could also draw in reluctant readers as they follow Herk’s quest. While there are some elements of the plot that need fleshing out, overall this story is excellent and leaves the ready eager to read book two, NNewts: The Rise of Herk, available now.

Posted by sott on March 11, 2016
Nnewts: Escape from the Lizzarks
Graphic Novels
Children's
Oh, the Thinks You Can Think