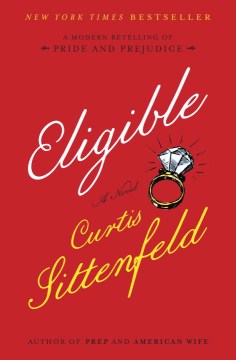 What do jogging, hate sex, cross fit gyms, and reality TV have to do with Jane Austen? Don’t be so 19th century. So what if Austen is rolling over in her grave. Sittenfeld has made a delightful pastiche of Pride and Prejudice, much more to my fiction-reading tastes than Pride and Prejudice and Zombies.

In this reimagined version of the classic, it’s 2013 and the Bennet family has relocated to a spider-infected old Tudor in an upscale neighborhood of Cincinnati. Country club lunches, anyone?

The five unmarried daughters still ground the story although all of them have turned very 21st century. Even Mrs. Bennet has been modernized, she’s now a shopaholic busybody. However, she still remains in determined pursuit of worthy husbands (rich, upper class) for her daughters.

Jane and Liz have flown the nest for New York City where gentle Jane teaches yoga, and Liz, writes for the entertainment mag, Mascara. She also sleeps with her married boyfriend. At thirty-nine, Jane has given up on finding a man, and has begun in vitro fertilization treatments in the hopes of having a child. Alas, no wedding bells in the offing for both Jane and Liz.

All the family daughters have the same names as in Austen’s masterpiece, and all are busy keeping secrets from the parents. The youngest three daughters live at home, mostly jobless. Mary has been earning serial master degrees for years, and disappears each Tues. night for assignations unknown.  Lydia has a beau, the super fit Ham who owns the gym, and despite his muscly chest and goatee, there is more to him than meets the eye.

Kitty meets a man whom her mother highly disapproves of, but what’s new with that.  If you’re a Pride and Prejudice purist, there is an elopement, and Darcy and Liz have an on-again, off-again friendship. Many of their assignations take place jogging. Also Jane meets a fine man but something or someone comes between them. Pemberley also exists but it’s now a gated mansion near Palo Alto, Cal.  Darcy has an ill sister, Georgie (instead of Georgiana), but this time she suffers from severe anorexia instead of a more traditional illness.

And then there is Lizzie herself.  “Obstinate, headstrong girl!”  Austen said of the main character of Pride and Prejudice. And Lizzie is headstrong.  She finds brain surgeon Mr. Darcy to be too full of himself, yet she can’t stop thinking about him.  And she barely has time for a relationship. She’s in Cincinnati because her dad has recently suffered a heart attack and he and her mother’s finances are in a bad way. As is their lovely Tudor.

This novel makes great summer reading: not too taxing, fun, some hot romance, but if you're a real Austen purist, stick with the original.  Even though I love Pride and Prejudice, I found this to be a quick, entertaining read.