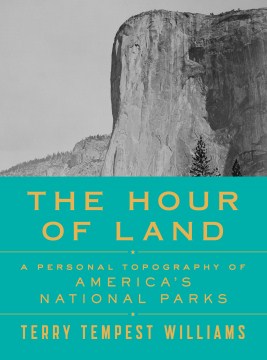 This book--timed to come out with the hundredth year anniversary of the National Park System--argues strongly about the necessity of keeping our park lands protected. It also reinforces why we need them in our modern world.

“Whenever I go to a national park, I meet the miraculous,” she writes in the opening section. She also says that our national parks “are blood. They are more than scenery, they are portals and thresholds of wonder.” Having just returned from Yellowstone and the Grand Tetons, I heartily second that.

Although she has visited many parks, and some, over and over, she has chosen twelve to highlight here. And I love how she does it. Not only does she share personal anecdotes about each of the twelve, but she uses various formats to do so.  For example, in the Big Bend section, she includes journal entries she wrote while there. Through riffs, all on a color theme, she shares what she saw and experienced there.

When she writes about Glacier, she tells the horrific story of almost dying there with her family in a blazing, rapidly-advancing wildfire. In fact, she and eleven members of her family were listed as burnt to death, so close did the fire pass them. Only a quick-thinking ranger saved their lives. This chapter reads like a thriller.

For The Gates of the Arctic, she describes this far northern park in minimalist poetic prose, including a chance encounter with a grizzly.  While visiting Gettysburg, she describes the enactors and how they try to bring the past into the present.

And I learned a new term: virga, a kind of rain that falls in black streaks in the desert and evaporates before it reaches the ground.

She also leaves us with a touching memory. Before her brother Steve died in 2005, he let her an antique monkey wrench. Even though he worked as a pipeline contractor and she, as an ardent environmentalist and activist, they  shared a love of the natural world and the works of Edward Abbey including his famous, The Monkey Wrench Gang.

But let me quote from Terry to summarize this inspiring, informative book:  “I see wilderness as water, our aquifer as human beings that ties us to the whole of this planet, the water that allows us to drink deeply form the source of community that comprises all life, not just the culture of our own species.” For armchair travelers or those lucky enough to go to one or more of our national parks in person, this is the perfect book for you.