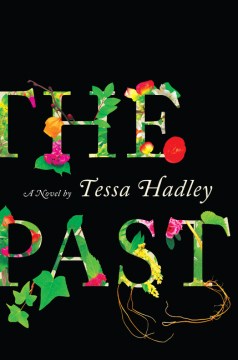 This novel is a dense, rich celebration of an English family, first in the present time, then in the past--the late 60s and early 70s.

In the first half, four siblings: Harriet, Alice, Roland, and Jane meet at the old family homestead near the sea for a family reunion.  The house is being sold, and it will be their last time together at their childhood home.

Accompanying them, are children (Jane’s), a new South American wife (Roland’s--his third), a young friend, and son of a former lover (Alice’s), and all alone, (Harriet).

In the siblings’ idiosyncratic fashion, Harriet arrives first; she leaves the house locked and goes wandering in the forest.  Alice arrives with Kasim, and then realizes, what she has done, brought an eighteen-year old to a place with nothing going on. Roland calls and says there will be delay, and that he and Pilar will arrive on Sunday.

Alice runs through the house, throwing open windows, picking and placing beautiful bouquets in each of the adults’ room, while Jane, the mom, practically begins cooking the evening meal as her two children, Ivy and Arthur explore.

Privately, Jane and Harriet discuss whether Kazim is more than a friend to wild, actress Alice. Kazim reads on the porch terribly bored. But on Sunday when Roland, Pilar and Molly, Roland’s sixteen year old daughter, arrive. Kazim immediately perks up at Molly’s appearance.

Soon the children, Ivy and Arthur, follow Molly and Kasim on a walk, and while the teens flirt with each other on the lawn, the younger kids enter an abandoned house where they find a dead dog in an upstairs room and pornographic magazines in the other.

Pilar is aloof and beautiful and hints at a mysterious past in Argentina to Harriet, whom she befriends.  Soon Harriet develops a serious crush on her. They go swimming in the sea, take road trips, and slowly Pilar reveals her past to Harriet, telling her things she has kept from Roland who is super busy with his professional life. Plus Roland believes staunchly that marriage should be full of “mutual incomprehension.”

In part two, the scene switches to Jill, mother to Harriet, Alice, and the rest. It’s the 60s, during the big French student demos and she has left her husband who has gone to France to report on them. He’s had a dalliance with a young woman, and Jill refuses to be humiliated. She goes home with three young children, including Harriet and Roland, and you see the same house, and the old cabin from the perspective of time.

Jill’s father is the vicar, as well as a poet. It’s the era of short skirts and revolutionary politics, not necessarily in that order.

Every word, sentence in this book is carefully chiseled and the land and sea are beautifully described. It’s a book about what makes a marriage, work, and how families both nurture the young, and ignore them, letting them discover their true selves. No page turner, this is a book to be enjoyed and savored.

Posted by dlynch on August 18, 2016
Blogs:
Information, Answers & Reviews
For the Love of Reading
Reviews Subjects:
Fiction
Family Relationships
Reviews Titles:
The Past